We knew the owners could be shady, but just look at this list of ways they're screwing the fans

A couple weeks ago, we put the owners of our favorite teams on watch. For too long, they've gotten away with anti-fan behavior — making profits more important than the fan experience, in ways big and small.

So with your help, we're going to keep calling them out. Fans across the country have been sending us examples of ways their favorite teams' owners have screwed over the fanbases. Take a look at some of the lowlights — but beware, just reading this list will probably make you feel really angry and maybe a little dirty.

From the Indy Star:

The game has always been a risk, you know, and the way certain people are. Look at it. You take an aspirin, I take an aspirin, it might give you extreme side effects of illness and your body.

Right, Jim... So everyone who takes aspirin should wear a helmet and pads? Whatever you say.

2. Vikings owner Zygi Wolf was hit with a $84.5 million judgment for fraud, breach of contract and racketeering. The trifecta!

A judge in New Jersey on Monday ordered Minnesota Vikings owners Zygi and Mark Wilf and their cousin Leonard Wilf to pay $84.5 million to two former business partners who she previously ruled they had defrauded in a 1980s real estate deal. [Superior Court Judge Deanne] Wilson ruled last month that the Wilfs had committed fraud, breach of contract and breach of fiduciary duty, and violated the state's civil racketeering laws. In a stinging rebuke, Wilson said then that Zygi Wilf demonstrated "bad faith and evil motive" in his trial testimony.

I've been around St. Louis and Missouri a major portion of my life," he said. "I've never had any desire to lead the charge out of St. Louis. That's not why we're here. We're here to work very hard and be successful in St. Louis.

Does Stan even know what words mean?

4. Panthers owner Jerry Richardson claimed financial hardship and a desire to "take back our league" from the players... while his team earned $112 million in profit over two years.

In 2010 and 2011, as the NFL prepared for and staged a lockout of its players, Carolina Panthers owner Jerry Richardson was among the hardest of the hardliners, urging his fellow owners to "take back our league" by demanding a more management-friendly collective-bargaining agreement. Meanwhile, according to an audited financial statement obtained by Deadspin, Richardson's Panthers were making more than $100 million in profit over the fiscal years covering those two seasons.

You can practically smell the greed.

Aside from the fact that he imposed a $4 "security surcharge" on every ticket right after the attacks, the team commemorated the fifth anniversary of 9/11 in 2006 by selling cute little hats embroidered with the team's "R" logo (not the scummy part) and a patch in the shape of the Pentagon with the colors of the American flag (also not scummy). Snyder charged $23.99 for the hats - more expensive than any other hat on the team's website at the time (kinda scummy) - with no indication that the profits were to go anywhere but into Snyder's bank account (that's the super-duper-scumbag move). Washington was the only team to sell 9/11 commemorative merchandise in 2006 for profit or otherwise. 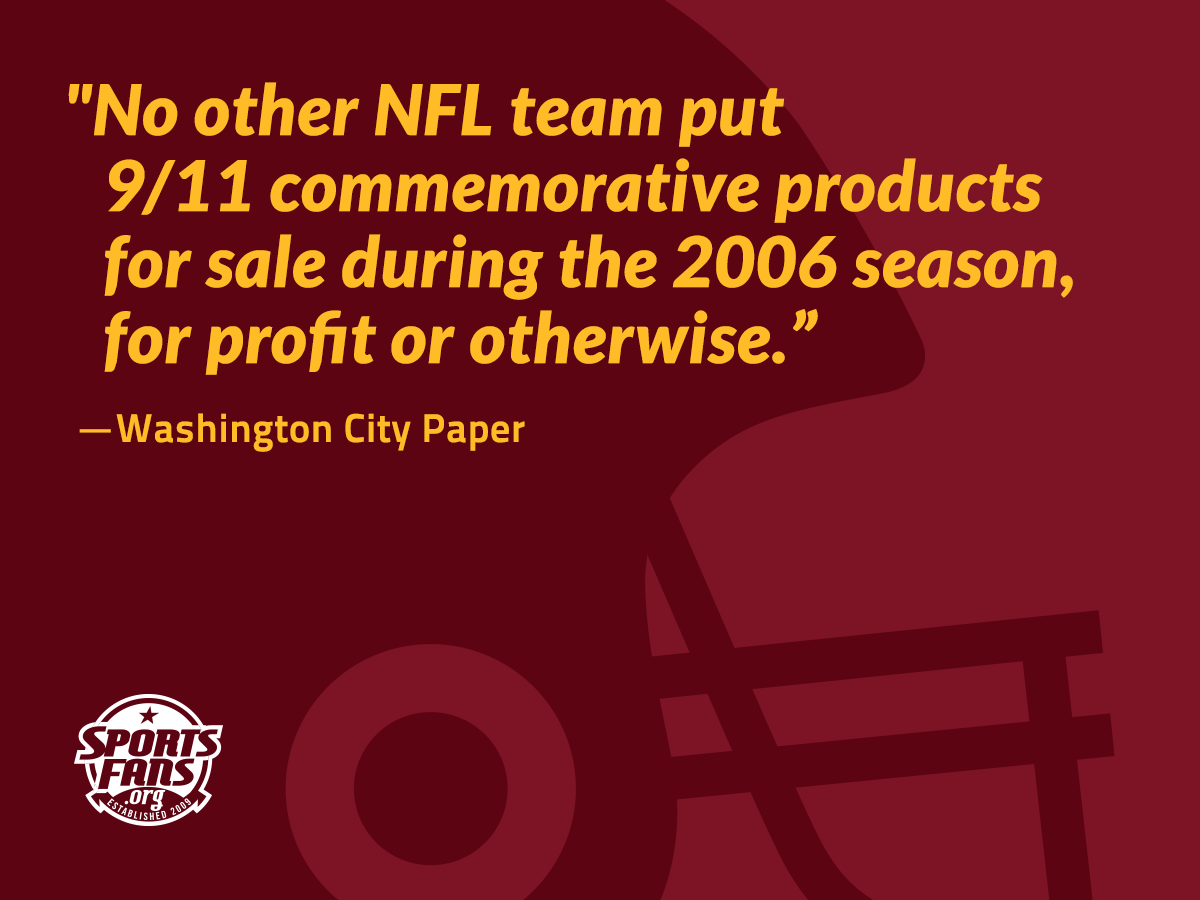