For a long time, we’ve said that the prices for concessions at sports stadiums are a rip-off. That doesn’t mean we don’t love ballpark food! The MLB, this weekend, held their inaugural food fest in New York City. All 30 teams sent a dish to highlight. One thing is for sure, peanuts and crackerjacks are so 1908!

To give you the scoop on the best food in 2018, Brian Hess went up to try the best of what baseball has to offer. Hess made sure to eat all he could (including the Mariners’ toasted grasshoppers!). To determine which team had the best food, he judged the food on presentation, creativity, representation of the region, most importantly, taste.

Before we get into the details of Hess’ playoff bracket, NL Central deserves an honorable mention. Every ballpark had great contenders. Unfortunately, we could only pick two to represent the division in the playoffs —Milwaukee and Chicago. The AL West didn’t make it easy either.

Here is this season’s competition. The ten teams who made it to the playoffs are:

The Wild Card Round

Entering the AL wild-card rounds were the Oakland A’s with their Monte “Khrush Davis” Cristo and the Minnesota Twins with Kurd-Marczuk. While the Twins’ cheese curds, sausage, and gravy threw a curveball with its complex flavor profile, the A’s managed to “khrush” it with a fun take on a Monte Cristo sandwich. The A’s unexpectedly used a waffle as the bread of the sandwich which provided a much-needed crunch to the dish.

Over in the NL, the Chicago Cubs led off with their classic Chicago Dog. The Colorado Rockies played a good game with their Helton Burger, but at the end of the day, the classic, representative hot dog won out against what otherwise was just a good burger. What sent this dog out of the park was the acidity of a crisp, sweet pickle that sliced through the fattiness of the sausage. There's a reason hot dogs like this are so classic.

With round one, the New York Yankees’ Adobo Bao made for some tough calls against the Texas Rangers’ Chicken & Donuts. We loved the Adobo Bao and appreciated how it made a beautiful fusion of Latin and Asian cuisine, which demonstrated the blending of cultures you can only find in New York. After nine innings of deliberation, the Rangers’ line-up with a sweet donut, crispy chicken, and buffalo ranch sauce, though, won out.

Also, in round one, the A’s, coming off their wild-card win with an innovative Monte Cristo, took on the Cleveland Indians’ Flamethrower, a pulled pork sandwich with bacon jam and Flamin’ Hot Cheetos.  The Flamethrower pitched a hot game with their Flamin’ Hot Cheetos. While not super spicy, the Cheeto powder came out of left field and balanced the sweetness of the sauce, earning the Indians a well-deserved win over the A’s.

Round one in the NL was just as delicious and contentious. The Arizona Diamondbacks’ Churro Dog was one of the best representations of a team’s home field. This home team advantage, along with their sluggers of a churro with a chocolate-iced donut, let Arizona beat out the Braves, despite an otherwise strong pulled pork dish.

The battle of the dogs took place between the Chicago Cubs and the Milwaukee Brewers. Hot dogs are classic ballpark food, but the Brewers’ Cheddar Beer Bratwurst elevated stadium dogs to a whole new level. Warm cheddar cheese oozed out of the sausage, and the juices were quickly soaked up by a light, but sturdy, pretzel bun. Pretzel buns are the utility batter of the hot dog world, and it carried Milwaukee’s brat into the next round.

Round two got a lot tougher. It was a hot game between Cleveland and Texas. Texas' buffalo chicken ranch sauce took on the Flamin’ Hot Cheetos to see who could throw the hotter fastball. Ultimately, Texas’s heat held back Cleveland’s offence while the Rangers’ crispy chicken and donut played some great small ball. Texas’ sandwich had more dimensions in the flavor profile, and we had to give them the win.

Arizona’s Churro Dog versus Milwaukee’s Cheddar Beer Bratwurst was back-and-forth. This was tough; both were delicious and fantastic representations of their regions. However, Arizona’s Churro Dog was messy. We had to ask, what would be more enjoyable to eat in the stands? Melting frozen yogurt and dripping chocolate syrup and caramel is not enjoyable. Milwaukee clinched round two.

Now, the World Series of Food! The AL’s Texas Rangers’ Chicken and Donuts takes on the NL’s Milwaukee Brewers’ Cheddar Beer Bratwurst. The decision was rough and, if this were the real World Series, it would have gone into game seven. When all was said and done, Texas had a lot more creativity behind their sandwich than the very midwestern bratwurst.

What carried the Rangers the entire way was its delicate and effective small ball playing style. The Brewer’s only had one heavy-hitter, cheese stuffed sausage. The Texas Rangers win SFC’s World Series of Food! 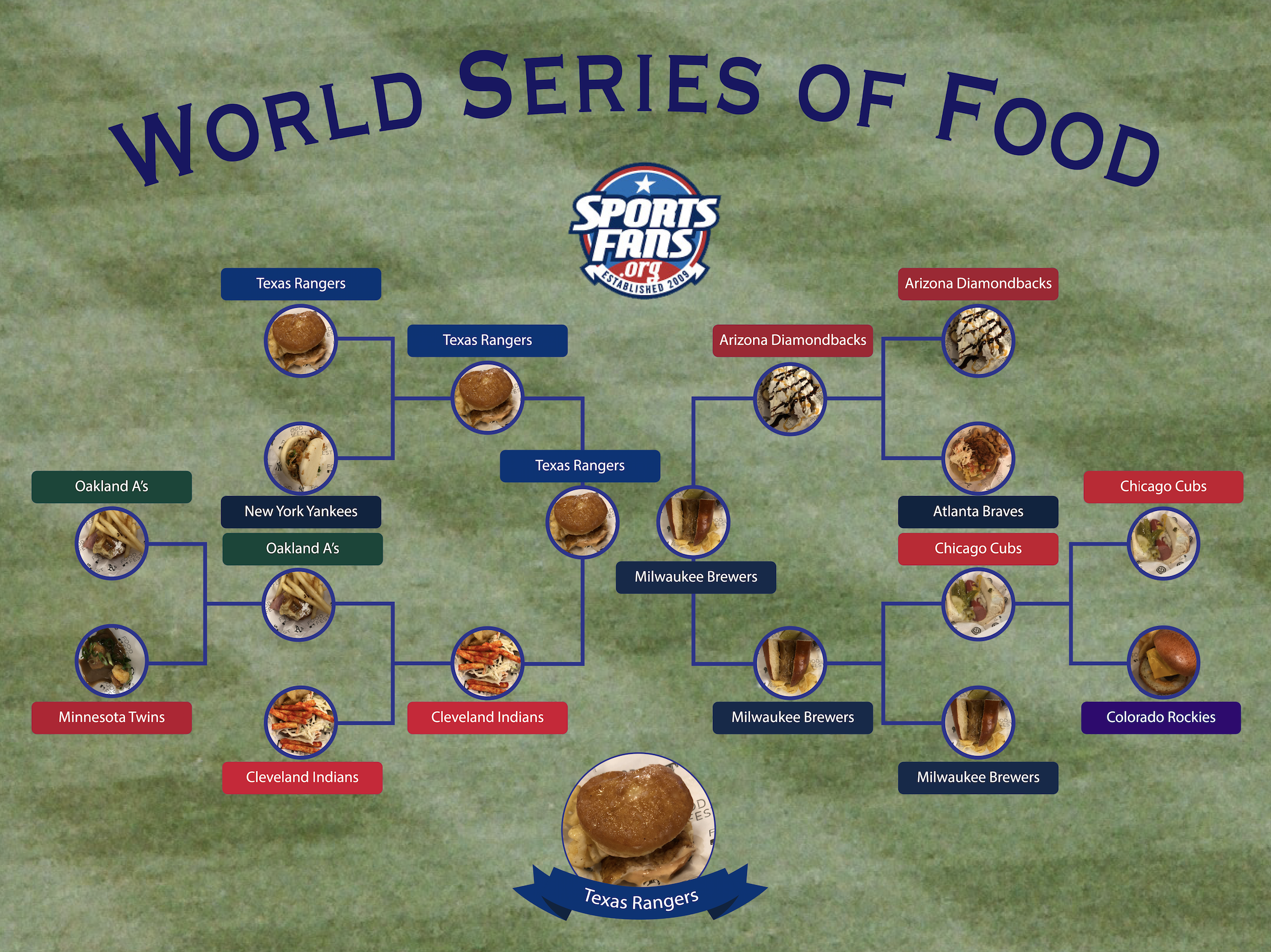